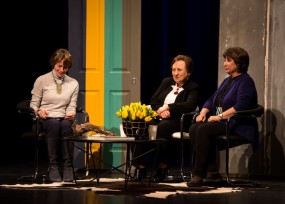 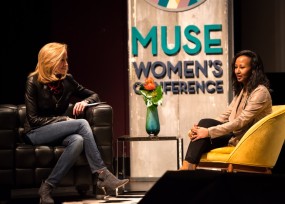 Lynne had the opportunity to interview Nobel Peace Prize laurete Shirin Ebadi on stage at the event. Shirin is an Iranian lawyer, a former judge, and human rights activist. She founded the Defenders of Human rights Center in Iran and was awarded the Nobel Peace Prize in 2003 for her significant and pioneering efforts for democracy and human rights. Lynne also works closely with Shirin within the scope of the Nobel Women’s Initiative.

Sara had the privilege of interviewing Maha Babaker at the conference. Maha is an amazing young global activist from Sudan who focuses her attention of culturally justified violence against women in Sudan and aims to challenge the growing harassment and violence against women and girls that are justified by the Sharia laws and culture. Maha is also a part of the Nobel Women’s Initiative’s Sister to Sister Program.

All-in-all the World Muse Conference, which held its fourth event this year, was a major success in large part because of Amanda Stuermer, the founder of Muse.

“Amanda was flawless and the entire event was perfection,” Sara said.