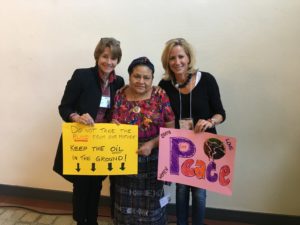 One of the great privileges of the work of the Soul of Money Institute is our consultancy with the Nobel Women Peace Prize laureates.

The Foundation of NWI

Six of the women who have won the Nobel Peace Prize have formed an extraordinary global initiative, called the Nobel Women’s Initiative (NWI).

The vision of NWI is a world transformed through a rejection of war, violence and militarism where global security is built around human rights, justice and equality for people and communities – human security – rather than the security of the nation state. It is a world where sustainable peace and the protection of the environment on which all life depends is our collective priority.

This work is in it’s tenth year and is catalytic, inspiring and immensely fulfilling for us to be apart of. The six Nobel Laureates who formed NWI host a conference every other year for women leading grassroots organizations in countries all over the world with a special focus on women living and working on the ground in circumstances of war, oppression, sexual violence and intense discrimination.

Sara Vetter and I have just returned from four days with the Nobel Women Peace prize laureates and 50 selected courageous women living and working in what are nearly unbearable conditions in countries such as: Syria, Yemen, Iran, Iraq, Palestine, Sudan, Congo, Nigeria, Guatemala, etc. Their vision, courage and strength is breathtaking. What they endure in a day is more than many of us will need to face in a lifetime.

At the conference we were able to witness, give support, and partner with women facing the most horrendous, confronting conditions on earth.  In the face of those circumstances, these courageous women leaders run grassroots organizations defending the human rights of women and girls, intervening in the escalation of violence, and providing safe spaces for healing and restoration.

Too often in the great privilege and comfort most of us enjoy, we forget that hundreds and millions of women and their families live each day in fear, struggle and oppression. NWI, through the visibility and power of the Nobel Prize and what it can bring to these hot spots of immense challenge, does a remarkable job of bringing hope, possibility, media attention, sisterhood and financial resources to these heroic women.

We discussed strategies to deal with unjust imprisonment of women in Syria, Iran and Yemen. We listened to stories of heartbreaking violence and blocking of basic human needs. We found strength sharing our commitment to social justice, stopping impunity, and bringing humanitarian aid and support to some of the most desperate situations on earth.

It was humbling and inspiring.

We sat in the same room with Majed from Syria who was sentenced to 20 years of prison. After enduring 8 years of torture and unbearable conditions, she was released in exchange for Syrian prisoners in Iran and now lives in Jordan working to empower the 4 million Syrian refugees and their families.

We shared space with Thida from Myanmar, a medical doctor, who was arrested and also sentenced to 20 years for distributing an unlawful leaflet. She was released when her health was so frail that she was down to 80 pounds. By the efforts of Amnesty International, she continues to lives in Myanmar, standing up to the regime and treating the injured in hospitals as well as writing articles that get distributed outside the country about the military’s oppression inside her country.

Women working on the ground in Yemen, Congo, Iran, Iraq, Guatemala blew us way with their courage, resilience, capacity to organize in the face of nearly insurmountable conditions.

These remarkable Nobel women provide extraordinary support, empowerment and inspiration for their sisters around the world, to endure, prevail and transform the most challenging circumstances for women on earth.

The famous phrase “What doesn’t kill you, makes you stronger” is an accurate description of the grassroots human rights defenders who attended the conference. They have the strength and vision to rise above their circumstances and lead from principles and inspiration in a way that is stunning and profoundly inspiring. There is so much to learn from them.

It is an honor for the SOMI to have the privilege of participating with the Nobel Women’s Initiative.