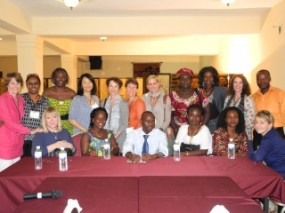 It is midnight on Wednesday night in Monrovia, the capital of Liberia, West Africa. Our delegation of Nobel Women Peace Prize Laureates accompanied by activists, philanthropists, and key media supporters has had a major impact in the five days we have been in this amazing country. The power of the Nobel Prize and the cache and visibility of the Nobel Laureates has given us an open-door to meet with people working at the highest levels of power and authority in this country. Today we met with President Ellen Johnson Sirleaf, the first head of state in history of an African Nation, who herself is a Nobel Peace Prize Laureate. We met with one of the chief ministers of the department of Justice, the Chief Prosecutor for Rape and sexual violence (an amazing woman judge and attorney), the head of UN Women and her staff, and the US Ambassador to Liberia. Over these last few days we have met with the Women's Leadership Caucus in the Legislature, the leading historians and scholars of Liberia, the head of the UN Mission to Liberia, and the leaders of some of the largest and most important NGOs in the world. It has been an unbelievable privilege.

However, none of those meetings compare to the experience of being in the rural communities of Totota – pronounced  Toe-toe-TAH,  and Rayala pronounced Ray-AH-lah, where we met with some of THE most powerful and inspiring women on the face of this earth. These women, inspired by Nobel Laureate Leymah Gbowee, our host, orchestrated and literally caused the peace process between the brutal warring factions that ripped this country apart for years and years.  They faced down vicious warlords who commanded thousands of heavily armed and drugged child soldiers and violent young men.  They had the unbelievable courage to bring an end to the atrocities and brutality, and demanded and delivered an end to the violence. They did it with sheer bravery, determination,  collective will, and the epitome of non-violence. They are responsible for bringing this country into the post conflict recovery and peace that is now going into its tenth year.

This part of the story moved me to my core:

When the peace agreement was signed in 2003, it was the UN that was charged with bringing in peacekeeping troops to disarm the vicious rebels and the hated government militias. The UN offered cash for guns but the process the UN designed to have the guns turned in was a total disaster and erupted in more violence.

These same amazing women then turned their collective power on the job of disarming the combatants. They met with the generals and warlords and enrolled them in bringing their boys and men in, in small groups, to turn in their weapons together. Once the men and boys had turned in their weapons and received their financial compensation, the women created a ritual to mark the transition and begin the healing. The women shaved the men and boys and then they bathed them, tenderly cleansing them of the hate and intensity of the violence that had taken over their hearts for so long and helped them return to their families and their sanity.

These are women who live far from any city or town in what we would call abject poverty.  They have no electricity, no services of any kind. There is no transportation system and the roads are a disaster. These are women who walk. They walk and they walk and they walk. They walk miles and miles for hours and hours with what they need carried on their head.

Their determination and strength is breathtaking. They sing, they dance, they drum, they laugh, they suffer, they sacrifice, and they deliver. The country is rebuilding itself and there is so much to do, and yet Liberia has come so far, in many respects, because of their resolve.

They are now tackling the horrific pandemic of rape and sexual violence in their country and we at the Nobel Women's Initiative are their allies in this and advocated for them in every high level meeting we had. It is a huge problem in this country and the Nobel Laureates “campaign to STOP rape and gender violence against women” is a central reason why we are here in this  country– to bring their struggle to the world and invite everyone everywhere to join them in putting an end to violence against women and girls in every form.

My gratitude deepens with every hour of every day for the honor of being on this amazing journey.