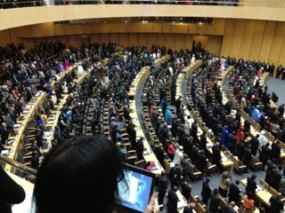 The Nobel Women's delegation that I am privileged to be part of arrived Friday night in Addis Ababa, Ethiopia, the only sub-Saharan nation that was never colonized and which never sold their people into slavery. Ethiopia is also the oldest Christian country in the world and is the seat of the African Union.

Several of the delegates who were with us for the Liberia portion of our trip departed and we have been joined here in Ethiopia by powerful women activists from Sudan, The Democratic Republic of Congo (DRC), Zimbabwe, Kenya, and South Africa.  Each of these women and one brave man run powerful organizations working to stop rape and sexual violence against women and girls.  In some cases their work is to heal and harbor the victims of that violence in safe houses and underground sanctuaries and help them get medical treatment, many at the famous Panzi Hospital in the DRC where the heroic Dr. Mkwege (pronounced Muh-KWAY-gay) had done 30,000 surgeries on women and girls who have suffered horrific internal injuries due to having been violently raped.

We are here in Addis Ababa to attend the Summit of the African Union (AU), the gathering of the 54 heads of state of the entire African continent. We attended the opening ceremony of the AU at the new AU headquarters, a spectacular building and complex, built by the Chinese as a gift to the continent of Africa.

The opening session was impressive and at the same time deeply confronting.

Africa has made tremendous progress in the last fifty years. The Africa Union began under the former name of the Organization for African Unity (OAU) in 1963 when the continent was in revolution and chaos. Those fifty years have been filled with many accomplishments including:  the decolonization of the continent; creating the sovereignty of all former colonial nations; and bringing into existence democratic governance in scores of newly independent nations.  In these fifty years many wars, revolutions, and conflicts have been resolved; many brutal dictators have been overthrown; apartheid was finally defeated in South Africa; and many new economies have been born.  Eight of the fifteen fastest growing economies in the world are now on the African continent.

Average incomes have risen dramatically; infant, child and maternal mortality rates have dropped significantly; literacy rates have doubled and tripled in many countries; and more and more girls are in school every year. There has been sustained peace in 90% of the countries on the continent for the last 10 years, access to safe drinking water is available to 60% more people, and technology is available almost everywhere, connecting the most remote rural communities to the rest of the world.

However, the problems continue to be daunting. HIV/AIDS has created millions of orphans.  Africa, the continent least responsible for Global warming and climate change, is the most severely affected by it.  Violent conflict continues in some regions and has now broken out in Mali.  Several brutal dictatorships are still in place; poverty is still a scourge; raising the status of women and girls needs tremendous work; and the horrors of sexual violence against women and girls continues.

Attending the opening ceremony of the AU was an opportunity to confront and witness the dominantly male posturing, bravado, and pomp and circumstance that characterizes many of the African Heads of State. Seeing them all there together – even though there are now women present in most of the Heads of State delegations, and there are two women Heads of State: President Ellen Sirleaf from Liberia and President Joyce Banda from Malawi, and – the new leader of the AU Commission is an extraordinary women named Mrs. Dlamini Zuma, – the experience of being at the summit was an experience of watching a theater of positioning and pompous protocols, punctuated from time to time with brief moments of commitment, authenticity, and wisdom.

The second day of the AU summit, our delegation composed mostly of extraordinary African women stayed out of the formal meeting hall and instead, networked brilliantly in meeting rooms, corridors, and behind the scenes with key staff members of heads of state. We held a press conference with print, radio, TV, and digital media journalists.  We met with leaders of UN agencies, and collaborated with leaders of large and small NGO's. We proliferated the halls and display tables with our “campaign to stop rape” materials and had conversations with “behind the scenes” power brokers at many levels.

We created amazing new alliances and exciting new horizons for the Nobel Women's Initiative's campaign “to stop rape and sexual violence against women and girls”.

The power of our delegation work here in Ethiopia has been focused more on our sister delegates from Sudan and the DRC than on the Nobel Peace Prize Laureate power. We are here with 4 amazing women leaders from Sudan and 4 from the DRC, all of them living in conflict zones and living in constant danger. They are all mothers, have families, run organizations, and work 24/7 to transform the brutal circumstances in which they live.  Their bravery and determination is incredible, their personal stories heart wrenching, and their commitment to create change, absolutely unstoppable.

We are powerfully bonded together out of this experience here. We are resolute and clearer than ever about the job ahead. We are expanding and deepening the power of this global campaign and movement with every conversation, every meeting, and every passing day.

Some photos are below.