I had the honor of attending the Nobel Women's Initiative conference entitled:

“Moving Beyond Militarism and War: Women driven solutions for a non-violent world” in Belfast, Northern Ireland from May 28th to May 30th.

All six amazing NWI sisters, the Nobel Women Peace Prize Laureates, were there: 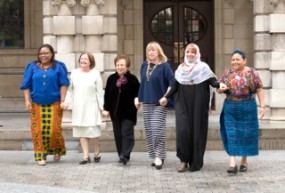 We were joined by more than 100 women, each leading an organization that is at work to stop violence against women and children in war zones, conflict zones, or a post conflict part of the world. The proceedings were conducted in Farsi, Arabic, French, Spanish and English, and the women participants were from countries all over the world including Iran, Afghanistan, Burma, Liberia, Colombia, Sudan, Haiti, Honduras, Israel, Palestine, Iraq, Egypt the Democratic Republic of Congo, Guatemala, Nigeria, as well as France, Ireland, the USA, Japan, Norway, Sweden, and other countries in the more developed world.

The women at this conference were selected because of their brave and astounding work. There were activists and powerful leaders of organizations doing incredibly courageous work in the brutal conditions of war, conflict, and oppression. There were also influential women government officials, journalists, academics, and physicians. There were women of all ages and nationalities, all religions and spiritual traditions. Each and every woman present was an unstoppable force. Many have taken a stand for ending the horror of rape and violence against women and creating a world of “non-killing” that is safe for women and children and everyone alive. There was a former woman US army colonel who resigned in protest of the Iraq war, there was a former US congresswoman, as well as passionate activists and philanthropists.

It was a privilege for all of us to be witness to what happened there. There is nothing like women coming together in any setting for any reason– and this gathering was so profoundly powerful that it is difficult to describe the surge of emotion and power that we witnessed.

Northern Ireland was chosen because of its history of being caught in cycles of horrific violence and conflict over hundreds of years. Through the incredible leadership of Mairead Maguire, a post-conflict peace was brought forth by thousands of mothers who risked their lives in the name of peace. We saw the walls that divide the city– that are still up, and are now called “Peace Walls”– ensuring that the violence does not re-erupt. We felt the pain and hurt that still lingers 15 years after the “Good Friday” peace accord was finally signed. 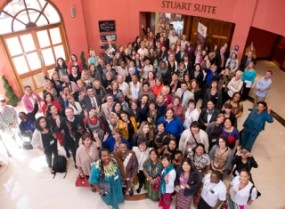 There were so many unforgettable moments to share. One deeply moving experience for me was seeing 6 women from Iran—professional journalists and lawyers, who also are mothers, and who had become activists to protest the treatment of women in their country after the revolution. Each had been imprisoned for their words and their work– for some number of years.  One had been sentenced to death, others to life in prison, and others to many years in prison–each one for standing up for freedom and for speaking their truth. Each woman had found a way out of prison in the last two or three years and now live outside of the country away from their families to stay alive.  Among them, one now lives in Sweden, another in Germany, another in France. These women had not seen each other since they had been in prison and they were reunited in Belfast by their sister Laureate Shirin Ebadi from Iran.

I witnessed them reconnect for the first time since they had been released from prison. I watched them fall into each other’s arms. I watched them hold each other and cry and cheer and laugh and dance together with joy. It was an image I will never forget.

The conference sessions were filled with testimony of the brutality of war, the intensity of the breakdown of institutions and society, the physical and emotional toll that is unimaginable on women and their children. It was also filled with the power of women coming together and to support and heal each other through unbearable trauma– after a military gang rape, seeing their children blown to bits from a bomb, having their homes burned to the ground and moving their family from refugee camp to refugee camp– constantly fleeing from more and more insanity and violence.

Another key moment for me was seeing a group of about 50 women who were in their 70's and 80's who sat together in the audience at our big public event at City Hall in Belfast the first night, bursting with pride to be together again. They were many of the leaders who, with their sister Laureate Mairead Maguire, led the thousands of young mothers in 1976 who courageously filled the streets of Belfast and marched and demonstrated, at great risk to themselves. While bombs blew up around them and some of their sisters were killed, they would not leave the streets until the Peace Process was initiated during that terrible time of war in Northern Ireland. 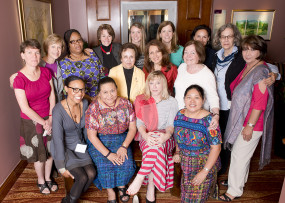 We learned so much about the culture of militarism in which the world is entrenched, how we as a culture glorify war and violence every day, how HUGE the weapons industry has become and how unfathomable amounts of money are invested in developing ever more sophisticated technologies for killing. We met survivors of the Hiroshima and Nagasaki Nuclear bombings and heard testimony of the decades and decades of work it takes to rebuild, repair, and heal from each act of war.

The stories of the work that these 100 women leaders are doing to address the horrors of violence were stories of such bravery and heart, such insight and skill, such commitment and courage, that it took our breath away. There were stories of underground sanctuaries in Africa where sexually abused women could go and be medically treated and healed, underground railroads moving women leaders out of danger, dramatic escapes from prison, women coming bravely together and turning the tide of violence and transforming their circumstances into the fragile road to stability and peace. There were stories of courage and triumph in Burma, breakthroughs and effective interventions in Afghanistan, legal cases won in Colombia, impunity beginning to end in Rwanda, and dictators who orchestrated massive rape and genocide indicted and held to account.

The Nobel Laureates provided inspiration for what is possible. Their lives are each a testament to the power of unstoppable women to turn the tide. Each session built on the one before and by the end of the three days, new strategies were developed, new levels of courage were discovered, new relationships were formed, and new possibilities burst forth.

We became a body of ever more unstoppable women leaders who will use the precious gift of our own lives to stop the madness, to end the impunity, to raise our sons and grandsons to say no to war and violence. We committed to continue and deepen the work to heal both the victims and the perpetrators, who we know are victims themselves. We are at work to transform the culture that would produce such insanity. We know, as women and mothers, that ” hurt-people hurt people and healed-people heal people” and that in many ways this is our deepest work.