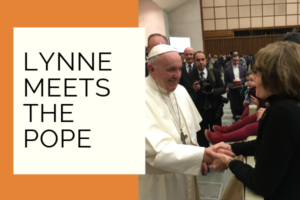 This blog post is from Lynne Twist. In it, she shares her direct experience of meeting Pope Francis, learning about his initiatives on behalf of Nature and Indigenous people, and what it was like to be inside the Vatican.

I am overflowing with inspiration and gratitude.

I have just arrived home from a wonderful trip to Rome to see our son Basil who is there on a fellowship. It was a beautiful family vacation; and also, we had some incredible opportunities that were nothing short of miraculous.

The Pope and the Environment

As you may know, Pope Francis' encyclical on the environment, Laudato Si, is the first time any Pope in history has addressed and taken on the issue of the preservation of the natural world. (For more information on Laudato Si, please click here.) 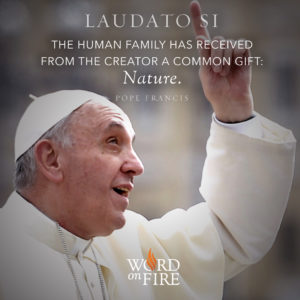 In addition, last July, Pope Francis met privately with a delegation of our indigenous partners from the Amazon. They asked him to rescind the “Papal Doctrine of Discovery” which dates back to 15th Century Popes who mandated the explorers to essentially go to the New World, take the land and enslave or kill the local people. Indigenous people have asked the last three Popes to rescind that doctrine; and, up until last year, nothing happened.

However, at that meeting in July, Pope Francis agreed to rescind the Papal Doctrine of Discovery.

We are told that that meeting was key and it inspired Pope Francis to rethink the Church’s relationship with the Amazon, as well as, the Church’s relationship with Indigenous people. As a result, Pope Francis has committed to convene a synod (an assembly of bishops in the Roman Catholic Church) in October, 2019. This synod will have a focus on protecting the Amazon and addressing the needs of the Indigenous people who inhabit that vital eco-system.

We were able to discuss the synod with the Ambassadors and to get there take on what is possible there. It was amazing.

An Audience with Pope Francis

Then, Jose Luis, the Ecuadorian Ambassador to the Vatican, arranged for us to participate in an audience with Pope Francis. My husband, Bill had to get back to the USA that day so he could not come; however I was able to bring our son, Basil.

I want to share with you the amazing moments Basil and I had with Pope Francis. We were so so fortunate and blessed, and I feel that it is my responsibility to pass on that blessing to you.

Here is how it was…

Basil and I were given very precious “document-like” invitations arranged for us by the “Holy See.” We arrived at a private gate to the Vatican very early on Wednesday morning, January 9th, 2019. There were thousands of people in St. Peter’s Square. We were escorted through all kinds of security, down some special corridors, past long lines of pilgrims, and finally, into a room behind the stage of the Pope's “Great Hall.”

We were welcomed by the Swiss Guards and the Pope’s personal ushers and staff who wear formal deep purple long coats and white ties and medals. Then, we were brought into the gigantic hall and placed in the front row of the “Wednesday Audience” of about 2,000 people. This took place in a HUGE auditorium inside the Vatican City walls behind St. Peter’s Cathedral.

There were hundreds and hundreds of priests, nuns, students, pilgrims, monks, bishops, ministers and seekers from all over the world assembled in the audience. There were also about 50 brides and grooms in a special section—all of whom were wearing their full-on white wedding dresses and wedding suits. They were waiting to have their marriages blessed by Pope Francis. There were also dozens of Cardinals assembled in chairs on the stage waiting for the Pope in their elaborate finery. And, there was a choirs of monks and priests singing beautiful hymns as we all waited for the Pope to come.

When he entered the Auditorium, Pope Francis came in from the back flanked by security and walked down the center aisle of the huge hall. When he came in, people cheered, jumped up and down, stood on their chairs, and cried. It was like a kind of “holy rock concert.”

The Pope greeted as many people as he could as he walked slowly down the center aisle of this huge auditorium, packed with ecstatic people, babies, mothers, disabled people in wheelchairs, monks, nuns, priests, buddhists, muslims, all kinds of amazing people—every color, size, age and faith.

Then, when he reached the front of the hall, he walked up the steps to a grand stage and sat in his chair to address the crowd.

We were so so blessed to hear his beautiful message of courage and hope which was then translated into nine languages—one by one—each by a different Cardinal from a different country.

After that, Pope Francis came down from his throne-like chair toward the crowd and walked over to the brides and grooms' special section and tenderly blessed every single couple.

Then, he headed toward us. It was such a thrill to watch him as he generously spoke to each one of the approximately 40 people who were seated in our special cordoned-off section right in the front.

Receiving and Passing On the Pope's Blessings

When he came to Basil and me, I took his hand in both of mine and he took my hands in both of his and I thanked him, through my tears, for his brilliant encyclical on the environment, “Laudato Si.” I told him that we are so so blessed to work closely with the indigenous people of the Amazon. I told him that all of us at Pachamama Alliance are deeply grateful for his commitment to rescind the “doctrine of discovery.” I told him how blessed and grateful we are that he will convene a synod in October on protecting the Amazon and empowering the indigenous people in that most critical part of the world. And, I thanked him for his humility, courage, leadership, and profound love for humanity and the Earth. 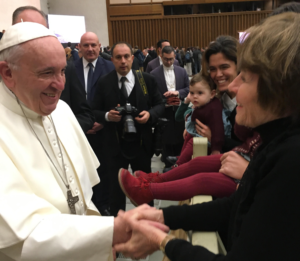 I felt his unconditional love, his blessing, and the immense grace of being in his presence.

Then, he moved to Basil, my son, and I watched him look deeply into Basil’s eyes and soul as he blessed him as well.

It was incredibly moving to be with Pope Francis. He is the embodiment of humility, grace, and unconditional love. He is overflowing with kindness and joy. He seemed to have boundless energy, and it is clear that he loves nothing more than being with the people.

Basil and I are so grateful. This was an unforgettable “silver box” experience that we will carry with us for the rest of our lives.

I feel l like I was there to carry his blessing to all of us.

With love and immense gratitude,
Lynne

16 Responses to Lynne Meets the Pope & Carries His Remarkable Blessings