A Full Circle Moment With Oprah And Lynne 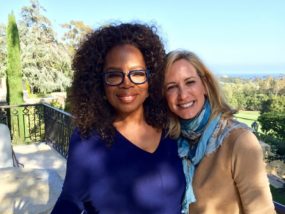 As you know, last week, Lynne was asked to be on Oprah’s Super Soul Sunday program and I had the privilege to accompany Lynne to Montecito for her interview with Oprah. It was a dream come true and a commitment and vision I have held since the day I met Lynne.

There is a P.S. and full circle moment to the story of Lynne appearing on Oprah’s Super Sunday that I want to share, which has to do with my daughter Charlotte.

Twenty-three years ago, in Chicago, the birth of my daughter, Charlotte, was filmed and shown on the Oprah Show. I went into labor in the middle of the night on March 23 and the crew from Oprah was looking for footage for the show that next day. They asked to film her birth and I said yes. The footage was so amazing that Oprah’s team insisted that Joe, Charlotte’s Dad, be on the show that very next morning. Joe went, he was interviewed, Charlotte’s birth was shown, and Oprah welcomed her into the world live in front of millions of viewers…So, I’ve been a huge fan of Oprah for 23 years. A big fan.

Fast forward to the dream of getting Lynne on Oprah. Anyone who knows me knows that it was close to an obsession—working any angle possible to get Lynne on the show. At one of our workshops, I sat next to Iyanla Vanzant, who is a close friend of Oprah’s and a frequent guest. We connected, we bonded and Iyanla made it happen—and made it happen at lightening speed.

As Lynne shared, the day of filming was beyond magical for her and for me, too. It was so exciting; from the build up to the actual filming and then to top if off, Oprah invites us BOTH to dinner. Her amazing African daughters were there, who were ages 22 and 23, like my daughter, and Lynne was speaking to them about how to navigate going back to their homes in Africa and dealing with the pressure of financial expectations from their families. It was such an intimate and beautiful moment to witness it all. I was pinching myself the entire time.

Here’s the big BIG P.S: There came a moment when I got the courage to share with Oprah about my experience of Charlotte’s birth filmed on her show 23 years ago. I went on to share that she was graduating the next day and going into the Peace Corps in Africa. She couldn’t believe it and loved the idea of making a video for Charlotte—right there in her back yard—for me to show her for graduation. She left a simply beautiful message for Charlotte, to her personally. I cried, Lynne cried, and I was simply blown away. I flew to Denver for Charlotte’s graduation and showed her the clip and she cried too. It was a full circle moment that I will never ever forget and Charlotte will have forever as she heads off to the Peace Corps.

Oprah was beyond gracious, kind, generous and loving. I felt like I was the only person in the room too and it was one of the most memorable days of my life.

It is such a privilege and blessing to do the work I do with Lynne and is was a truly humbling experience to be able to accompany Lynne last week to re-meet Oprah. A full circle moment for me.

10 Responses to A Full Circle Moment With Oprah And Lynne